Leader of the Opposition, Paul Davies AM (Con, Preseli Pembs.) asked how many operations have been cancelled in the Welsh NHS over the last four years? In the absence of a clear answer by the First Minister, he decided to help him out:

“….the number of operations cancelled by Welsh health boards has increased by 7%, with an incredible 170,000 operations having been cancelled since 2015 at no fault of patients. The Wales Audit Office has stated that each minute of surgery costs £14. We are therefore looking at tens of millions of pounds wasted in cancelled operations, which our Welsh NHS desperately needs.”
– Leader of the Opposition, Paul Davies AM

The First Minister said this was an example of the Tories taking a complicated subject and “simplifying it beyond all sense”. Over half of operations are cancelled by patients, with the next largest group being cancellations for clinical reasons (i.e. not being fit enough on the day).

Paul Davies contested that the figures he gave related to non-clinical reasons and cited BMA concerns about capacity and under-funding. The First Minister’s go-to answer: 10 years of austerity.

Welsh farmers on the scrapheap?

Filling in for Adam Price for a second week running, Rhun ap Iorwerth AM’s (Plaid, Ynys Môn) first question was about the UK Government’s temporary post-Brexit tariff regime, which was leading to a situation where farmers could be priced out of foreign markets with an obvious effect on rural communities. He asked for the Welsh Government to put pressure on the UK Government to stop Welsh farmers being “thrown on the scrapheap”.

The First Minister said he hadn’t had the opportunity to go through the tariffs in detail just yet, but he wasn’t confident the UK Government was listening:

“I spoke with….Boris Johnson, when he came here to Cardiff back in the summer about the impact on the countryside here in Wales, the rural communities and falling out of the EU without any deal. He didn’t have very many answers, and he didn’t have very many details behind the answers that he did have to give me any confidence that the UK Government had considered in detail the impact of the path that they wish to follow on farmers here in Wales.”
– First Minister, Mark Drakeford (Lab, Cardiff West)

The second question was, of course, abour the Senedd’s name – which will be debated in agonising detail tomorrow afternoon alongside other things. The First Minister said “Senedd” was in common usage regardless of what the legal name may or may not be. He also confirmed backbench Labour AMs will have a free vote on any amendments regarding the name, partly contradicting what AMs were told last week.

After offering his own views on the name issue, Mark Reckless AM (BXP, South Wales East) turned attention to free movement, with a motion passed at the UK Labour conference supporting extending freedom of movement to the entire world and also granting foreign nationals an immediate right to vote – rights which are set to be added to the Senedd & Elections Bill tomorrow by the Welsh Government.

The First Minister told him it was the right thing to do:

“I think the Member is accusing me of supporting Labour party policy, so I’m grateful to him for that. I look forward tomorrow to voting in favour of allowing people from other parts of the world who have made their homes and futures in Wales to give them the opportunity to express their commitment to our futures by taking part in our democratic processes. That is absolutely the right thing for us to do….when those people feel that their place in Wales is less secure than it ever has been, where they are made to feel by others that they’re not welcome to be here….”
– First Minister, Mark Drakeford 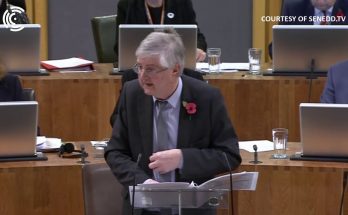 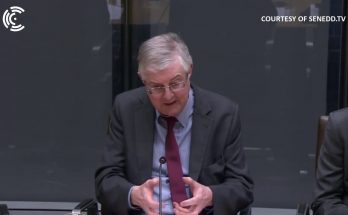