Large chunks of yesterday’s Senedd debate on the latest Withdrawal Agreement could’ve been copy-and-pasted from the previous Senedd debates on Brexit.

So for the sake of brevity, I’m only going to focus on contributions relating to the two “new” issues: the time left to approve the Withdrawal Agreement Bill (which has now been partially superseded by the House of Commons vote last night) and specific objections to the new deal itself.

Everything else – boiling down to “Respect the referendum result” or “We need to go back to the people” (all of which has been done to death) – gets junked, making this a whole lot easier to write than it otherwise would’ve been.

AMs will get a say on whether to approve the final version of the Withdrawal Agreement Bill in the future as it impacts devolved areas, but the UK Government can effectively ignore it.

“A bad deal for Wales”

First Minister, Mark Drakeford (Lab, Cardiff West), told AMs that while the deal itself has changed relatively little from Theresa May’s deal, the political declaration is more markedly different. He was convinced this was a bad deal for Wales all in all:

He said the UK Government had “sold the DUP down the river” and despite promises of there being no border in the Irish Sea, that’s now likely to be the case. This was a “huge breach” of the economic integrity of the UK and a breach of trust by the Prime Minister. It was also unconscionable that the UK’s parliaments would be expected to ram through “the most important legislation in decades” in just 10 days.

There had to be an extension to the Article 50 period and the First Minister repeated his support for a second referendum with Remain on the ballot paper.

Leader of the Opposition, Paul Davies AM (Con, Preseli Pembs.), said the deal has been agreed by both the UK and EU in good faith and is an attempt to deliver the referendum result. The alternative is no deal. He didn’t accept that three days wasn’t adequate time to consider the Brexit Bill, while David Melding AM (Con, South Wales Central) reminded everyone that the Senedd’s Continuity Bill was passed as an emergency law.

“There was an opportunity for compromise”

Plaid Cymru co-tabled the motion. Adam Price AM (Plaid, Carms. E. & Dinefwr) said there was an opportunity for compromise via single market membership and/or a customs union but that’s been spurned. Rhun ap Iorwerth AM (Plaid, Ynys Môn) said a hard border in the Irish Sea will threaten Holyhead’s position as the most attractive trade route between Ireland and the UK and on to mainland Europe.

Delyth Jewell AM (Plaid, South Wales East) argued that any type of consent needs to be informed and based on trust – trust which was “gained in bad faith” in 2016. If there’s to be a level playing field, then as long as the Northern Irish Assembly can renew its consent for arrangements, the same should apply to Wales and Scotland.

Taking the other side, Mandy Jones AM (BXP, North Wales) stated it wasn’t for the Senedd to make this decision or pre-empt the UK Parliament – though Carwyn Jones AM (Lab, Bridgend) countered by saying this was an important legal issue and will eventually be subject to the Senedd’s consent. Also, any deadline to pass the Brexit Bill is artificial.

Several AMs pointed out the length of the Bill and its supporting documents – running up to 1,000 pages for full scrutiny – and which MPs would have been expected to go through and approve in just 72 hours without accompanying economic impact assessments.

Neil McEvoy AM (Ind, South Wales Central) tabled an amendment calling for an independence referendum in the event of a “No Deal Brexit” – which was rejected. 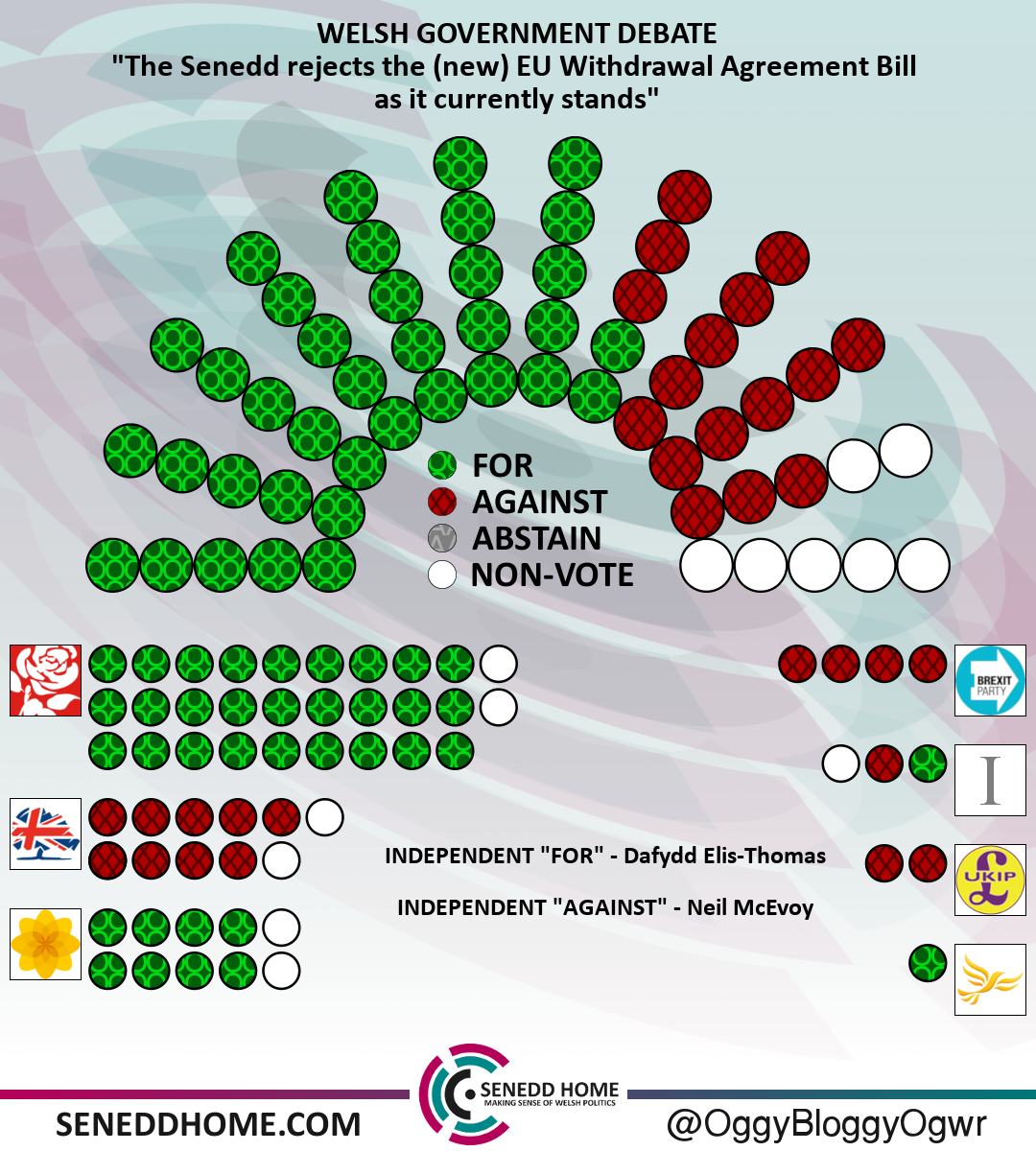