Lynne Neagle AM (Lab, Torfaen) noted that despite the rapid technological advances of the last fifty years, survival rates for pancreatic cancer have remained static in all this time.

“Pancreatic cancer is the tenth most common cancer in the UK but receives just 1% of research funding. Due to late diagnosis, seven out of 10 people with pancreatic cancer will never receive any treatment, and only one in 10 will receive surgery, which is the only curative solution. Fewer than 6% of those affected in Wales will survive for longer than five years – take a moment to reflect on that.”
– Lynne Neagle AM

Wales’ clinical lead on pancreatic cancer, Bilal Al-Sarireh, told her that while a specialist centre was set up a decade ago, he feels he’s letting patients down because they can’t access treatment quickly enough. The number of patients being offered surgery to remove the cancer has also dropped from 20% to under 15%. She asked whether the Welsh Government would consider establishing a specialist centre for liver, gall bladder and pancreatic surgery?

Several AMs noted the difficulties caused by the “silent” nature of the early symptoms. David Melding AM (Con, South Wales Central) believed there was poor public understanding and methods of identifying pancreatic cancer weren’t as advanced as for other forms of cancer.

Delyth Jewell AM (Plaid, South Wales East) spoke of her grandmother’s experiences before she died in 2005 which underlined how aggressive the cancer is. The odds were stacked against someone from the start and she supported calls from Pancreatic Cancer UK for a national diagnosis strategy and awareness-raising for the public and clinicians.

“She’d been a little off-colour at Christmas, but, like so many patients who don’t know that these symptoms are masking something deadly, she put off going to the GP. When she did go, no-one recognised the symptoms….16% of pancreatic cancer patients visit their GP seven or more times before getting a diagnosis. A few days after Christmas, she went to the GP again, and they didn’t know exactly what was wrong but they sent her straight to hospital. It was over the new year period, so the disease still wasn’t spotted for too long. My grandmother was left calling out in delirium because of the pain, and when the symptoms were finally understood and the fantastic palliative care team came on board, she died three days later.”
-Delyth Jewell AM

Caroline Jones AM (BXP, South Wales West) became aware of pancreatic cancer when a benign tumour was removed from her pancreas 30 years ago; two-thirds of adults are unaware of the symptoms. Neil McEvoy AM (Ind, South Wales Central) noted with some optimism that fast-track surgery in England was showing promise.

Health Minister, Vaughan Gething (Lab, Cardiff S. & Penarth), quoted figures which bear out how important it is to get an early diagnosis, as one-year survival rates for Stage 1 pancreatic cancer at 60% compared to a 28% survival rate overall.

Like other AMs, he noted the importance of surgery as opposed to drugs in treating some types of cancer and he would keep the idea of a specialist surgical centre on the table subject to advice:

“On the proposal about having a specific centre, I’ve listened and I will ask the clinicians at the Wales Cancer Network to consider that further, to give me advice to go into our cancer delivery plan for Wales and the work of the implementation group to understand what that would mean and the benefit that could provide for people in Wales.”
– Health Minister, Vaughan Gething 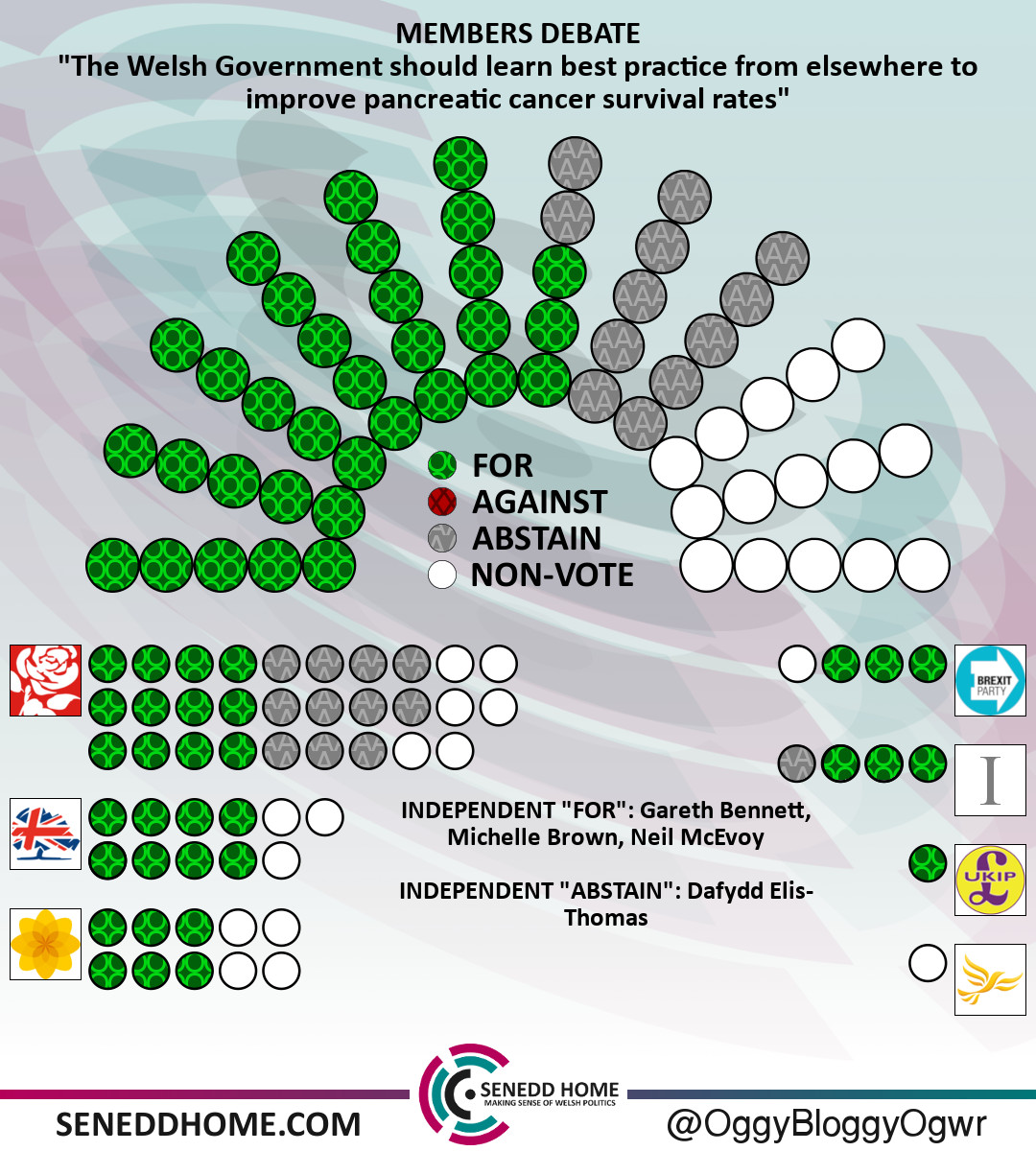