At the bottom of the cascade

Rhun ap Iorwerth AM (Plaid, Ynys Môn) said the lack of forward planning on rolling stock was causing a period of uncertainty for passengers. Trains themselves are now hard to come by, in part due to the previous franchise. “Cascading” – moving older trains between franchising” – sounds romantic, but Wales was often one of the endpoints.

One of the consequences is that if the “Pacer” trains are removed for non-disability compliance at the end of the year, nearly half the rolling stock in some parts of Wales would be lost.

Shadow Economy Minister, Russell George AM (Con, Montgomery), accused the Welsh Government of “peddling myths” that rolling stock was a matter for the UK Government for the past decade or more when responsibilities were passed to the Welsh Government in 2006. They were warned in 2013 and failed to heed those warnings.

While not necessarily accepting the content of the motion, even Labour AMs weren’t particularly happy with the current situation. Dr Hefin David AM (Lab, Caerphilly) told the chamber he’s been contacted several times on overcrowding, poor carriage conditions and season ticket prices. He said the Economy Minister had, perhaps, been “overselling” TFW’s immediate potential when they took over the franchise.

In practical terms, he thought it would be foolish to withdraw Pacers if there was nothing to replace them, even going so far as to describe the maintenance work at Canton depot as “heroic”.

Concerns over possible fall in passenger capacity on new trains

Like many other AMs, Delyth Jewell AM (Plaid, South Wales East) had her own experiences of the issues, particularly overcrowding and one incident of violent behaviour by a passenger. There are indications that capacity on some services – namely the Rhymney Valley – will actually drop once interim Pacer replacements are themselves replaced by new trains from 2023.

Work on doubling the Ebbw Vale-Cardiff line has seemingly halted, while progress on reopening stations at Crumlin and Magor have no firm commitments – later seconded by John Griffiths AM (Lab, Newport East). She also asked for clarity on a possible fare reduction in January.

“It’s great to see that there are more and more rail passenger users. That’s a testimony to the fact that people are now switching on to those modes; they’re seeing congestion on the roads and so on. But I have to say, I’m fortunate in that I get on the train in Maesteg or Ewenny Road or Garth, I’m always guaranteed a seat; even on match days, I’m guaranteed a seat. But actually, even on a normal day in peak time, by the time you get to Bridgend, it’s filling up; Llanharan, it’s full up; Pontyclun, it’s standing room only.”
– Huw Irranca-Davies AM (Lab, Ogmore)

Economy & Transport Minister, Ken Skates (Lab, Clwyd South), underlined that no rolling stock strategy was produced to prevent the (at the time four) franchise bidders from having their hands tied.

“Now, if, six years ago, we had chosen what types of trains we wanted to run across Wales, the scope for fresh thinking would’ve been severely hampered. For example, how would we have ensured that half of the new trains would be built in Wales, given that CAF hadn’t even begun looking at Wales at that time? Would we have developed a new, low-cost approach to overhead electrification? Would Members have accepted a strategy that relied upon battery, overhead and diesel hybrid trains? How would we have balanced the ambitions for a flexible metro with on-street running within a fixed budget envelope?”
– Economy & Transport Minister, Ken Skates

He thought it was “disingenuous” to claim the Welsh Government has done nothing. Also, Porterbrook – one of the train suppliers – is two years behind on a project to convert some old Thameslink trains into Pacer replacements. He wasn’t happy that Pacers may need to be used for longer than was promised, but TFW has been forced to do it.

A more favourable Welsh Government-worded motion noting various investments and expected improvements – as well as calling for the UK Government to develop a new rolling stock model – was approved by 31-16. 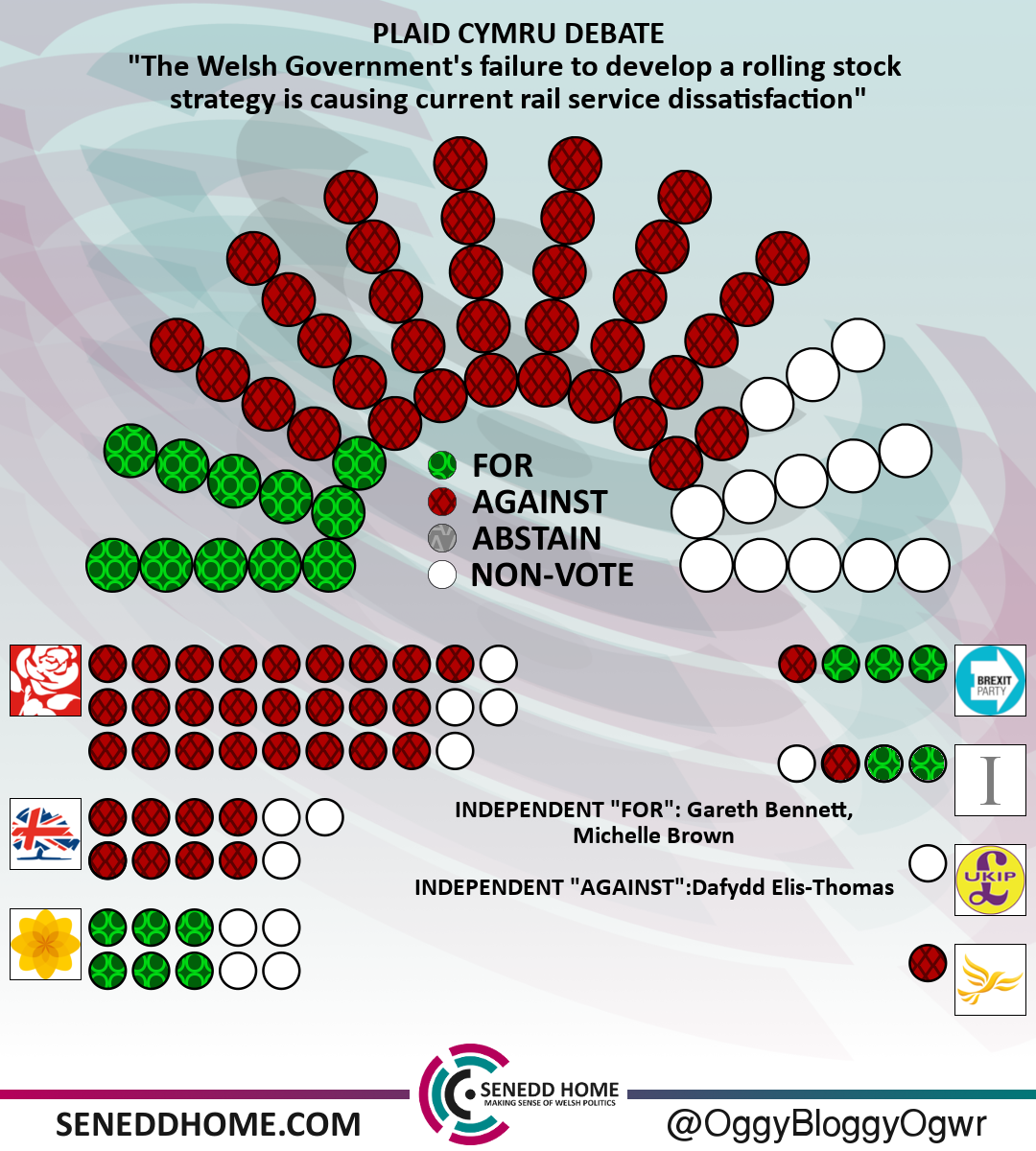