Due to several factors – namely the snap UK General Election – the detailed version of the draft budget (pdf) and the local government settlement (which will be looked at separately) were published at the same time.

The first debate on the budget takes place this afternoon. The Senedd’s Committees are expected to report back by 4th February 2020, with the final national and local government budgets expected to be approved at the beginning of March (in time for the 2020-21 financial year). 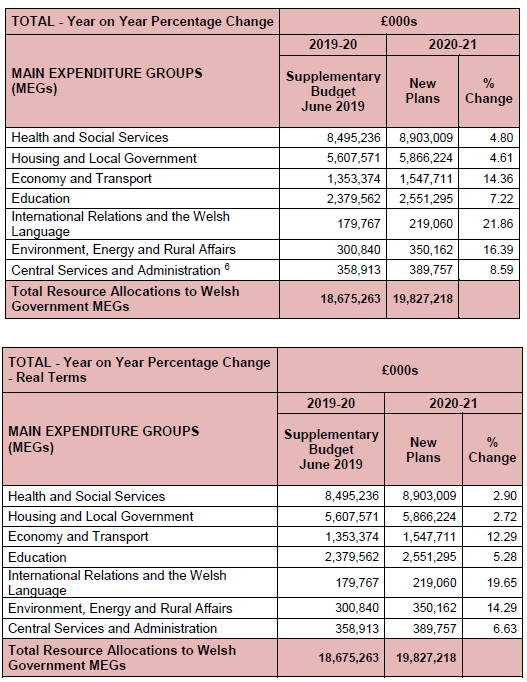 This is the first “good” budget in a while (depending on your definition of “good”). No Welsh Government department has had to cut its budget – though the overall budget is still lower than what it was a decade ago after inflation is taken into account (“real terms”).

If public spending had kept pace with economic growth since 2010-11, the Welsh budget would be £4billion higher than it currently is. Despite the spending increase, £125million has been drawn down from the Welsh Government’s reserves.

Health is a big winner yet again, with the Welsh Government intending to spend an additional £421million in revenue and capital during 2020-21, taking health and social care spending up to £8.7billion. £16million has been allocated for a New Treatment Fund, an extra £13million for mental health, while Public Health Wales will receive an extra £6.8million.

The Welsh Government will pilot “baby bundles” for parents of newborns at a cost of £150,000.

£206million of capital spending is earmarked for rail services during 2020-21, with an additional £20million provided to develop plans for a North Wales Metro.

A further £15million will be invested in teacher training ahead of the introduction of a new national curriculum, while an extra £8million will be provided towards additional learning needs. £3.3million will be used to address period poverty, while a £1million pilot will be launched to deal with “holiday hunger”.

Objectively, there are very few losers or notable cuts, but there are some areas which seemingly miss out. Substance abuse funding will be frozen at £29million. Only an additional £10million will be invested in the 21st Century Schools programme – which seems a little on the low side.

Just £5.5million has been allocated to develop an international strategy and post-Brexit trade strategy. Spending to support the Welsh language has also been frozen at £20.9million in 2020-21.

£64million has been allocated to deal with climate change and the environment – which is fairly low considering an “emergency” has been declared – with £29million of that going towards electric vehicle transformation (namely electric buses) and just £4.5million to develop a national forest.

As of April 2019, all childcare premises have received 100% business rate relief and this will continue until at least April 2022.

Council tax reduction schemes will also be maintained. High street business rate relief is being reviewed with no decision yet on a scheme for 2020-21 – though, subject to a law change, public toilets will be exempt from business rates as of April 2020.

There are no plans to change the Welsh rate of income tax, which will raise just over £2.2billion in 2020-21.

Landfill disposal tax rates will increase with inflation only and is expected to raise £36million in 2020-21.