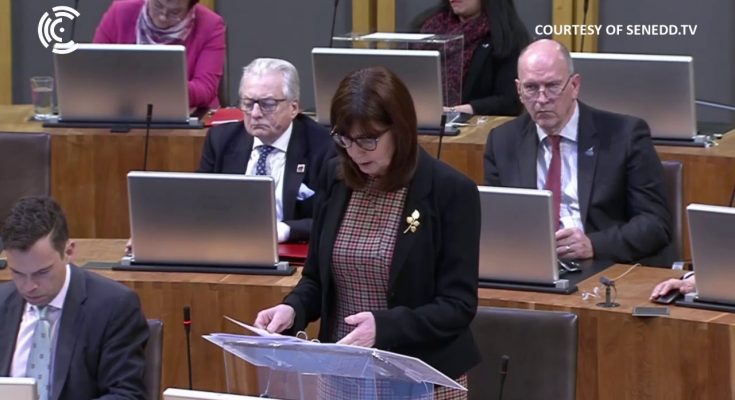 Following yesterday’s First Minister’s Questions, the Environment, Energy & Rural Affairs Minister, Lesley Griffiths (Lab, Wrexham), updated the Senedd on the practical measures being undertaken on the ground by Welsh and local government in the aftermath of storms Ciara and Dennis.

“Lucky no one was killed”

The Minister provided an update on the success of current flood prevention measures and concerns about coal tip stability following some landslides.

Shadow Environment Minister, Andrew RT Davies AM (Con, South Wales Central), asked when there will be a final figure for the cost of the floods? There were also issues around how often key infrastructure was maintained, with blocked culverts being blamed for causing flooding in Pentre in the Rhondda.

The latter point was echoed by Leanne Wood AM (Plaid, Rhondda), with residents often left to take matters into their own hands because help couldn’t reach them. She warned that some households could end up in fuel poverty for having to run energy-intensive dehumidifiers to dry their properties.

“We have in Rhondda Cynon Taf 557 flooded homes – 25% of the UK total. We have 500 flood-damaged business properties, and the businesses damaged alone in one area of Treforest, where something like 90% of the businesses were affected, is potentially estimated at around £100 million to £150 million. So, the guesstimate from the council….is in the region of £30 million to £40 million of damage, but I suspect it is going to be considerably more once those inspections are completed.”
– Mick Antoniw AM (Lab, Pontypridd)

While not one of the 2016 intake, UKIP AMs were elected off the back of a manifesto commitment (pdf – p37) to scale back inland flood defence spending and concentrate on housing bans on flood plains, dredging and “building flood-resilient buildings”. The Brexit Party seemingly inherited that policy, with Mandy Jones AM (BXP, North Wales) called for dredging in the River Dee to resume.

“We have very fast-moving rivers. They’re short. The energy they possess is astonishing, and quite frankly, some of the culverts are not fit for purpose for the speed of the water flow. We need to look at these watercourses and examine them in the whole system, about what can be done to deepen them and strengthen them and move that water away from the areas at most risk around businesses and homes.”
– David Melding AM (Con, South Wales Central)

The spiciest exchange took place between the Minister and Janet Finch-Saunders AM (Con, Aberconwy), the latter implying that financial assistance was only made available following Storm Dennis, not Storm Ciara (which badly affected the Conwy Valley) and there was no mention of support for flood-hit farms.

The Minister said any funding had to be properly audited and accounted for, but due to the tone of the Tory AM’s question, she refused to expand further. However, Llyr Gruffydd AM (Plaid, North Wales) made a similar point and warned that a postcode lottery was developing where some local authority areas provide more assistance than others even when the impact of flooding is the same.

Many other AMs described how the storms affected their constituencies and regions – usually praising the response of their respective communities or local authorities – though Vikki Howells AM (Lab, Cynon Valley) pleaded for households in flood-risk areas to be made more aware of the affordable insurance scheme Flood Re. 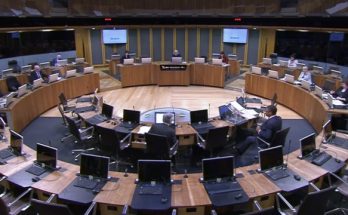