“There’s no sense to it”

Rhun ap Iorwerth AM (Plaid, Ynys Môn) said there were serious questions around the basic principle of sending vulnerable people a long way from home. He raised the concerns of constituents who, in one case, hasn’t been able to see his autistic son for three years and an anorexia patient only allow three 10-minute calls per-week with relatives.

Historic patterns of care commissioning had placed people in this situation.

“It would be one thing if these kinds of cases were rare, but they’re not. Hafal mentions a survey over a period where they couldn’t fill the beds that they had in their unit in Pontardawe, where 30% of the 1,000 people who were part of the study were placed in hospitals in England. There is no sense to that.”
– Rhun ap Iorwerth AM

Shadow Health Minister, Angela Burns AM (Con, Carms. W. & S. Pembs) visited some of the units in England which have (England’s) Care Quality Commission black marks against it, describing it as “grim” and “prison-like”. There was a shortage of medium-secure mental health units in Wales and that was, ultimately, why some patients are being sent 200-300 miles away.

Another area with a stark lack of provision was in perinatal/mother and baby care – currently subject to a Health Committee inquiry.

Delyth Jewell AM (Plaid, South Wales East) accused Labour of breaking a budget agreement with Plaid Cymru for a permanent unit to be established. Instead, an interim unit will be opened within a psychiatric hospital. Some mothers were facing a choice between receiving in-patient mental health support locally but being separated from their child, or being sent to a specialist mother and baby unit possibly up to 10 hours travel time away (factoring in baby-related stops).

“….the message to the Welsh Government is this: these women need this specialist support unit. The experts agree. You promised to provide it. Please get on with it before any new mothers have to suffer because of this scandalous inaction.”
– Delyth Jewell AM

Quality, value and distance considered when commissioning placements in England

Deputy Minister for Health & Social Services, Julie Morgan (Lab, Cardiff North) told the Senedd the Welsh Government’s investment in mental health aims to increase the proportion of people treated in the community, which has already led to a reduction in mental health hospital admissions.

That said, there will always be a need for highly-specialised services that may only be provided at units in England.

“Firstly, decisions are made on the quality and type of specialist care provided to ensure it meets the needs of the individual. Secondly, the commissioner considers the distance from home and any potential impact this might have on outcomes. And the final consideration will be the value or overall cost. So, quality, distance and value in that order are the key factors considered when placing people outside of Wales for specialist mental health in-patient care.”
– Deputy Minister for Health & Social Services, Julie Morgan

As mentioned earlier, an interim mother and baby unit is set to be established at Tonna Hospital near Neath by spring 2021, with services for women in the north set to be looked at too.

Plaid Cymru’s original motion was more strongly-worded, calling for English units receiving Welsh funding to be subject to Welsh inspection criteria and for the NHS to be banned from placing Welsh patients in poor quality English units – though it was rejected by 40-11. In the end, they abstained, which is neither approval or rejection of the reworded motion. 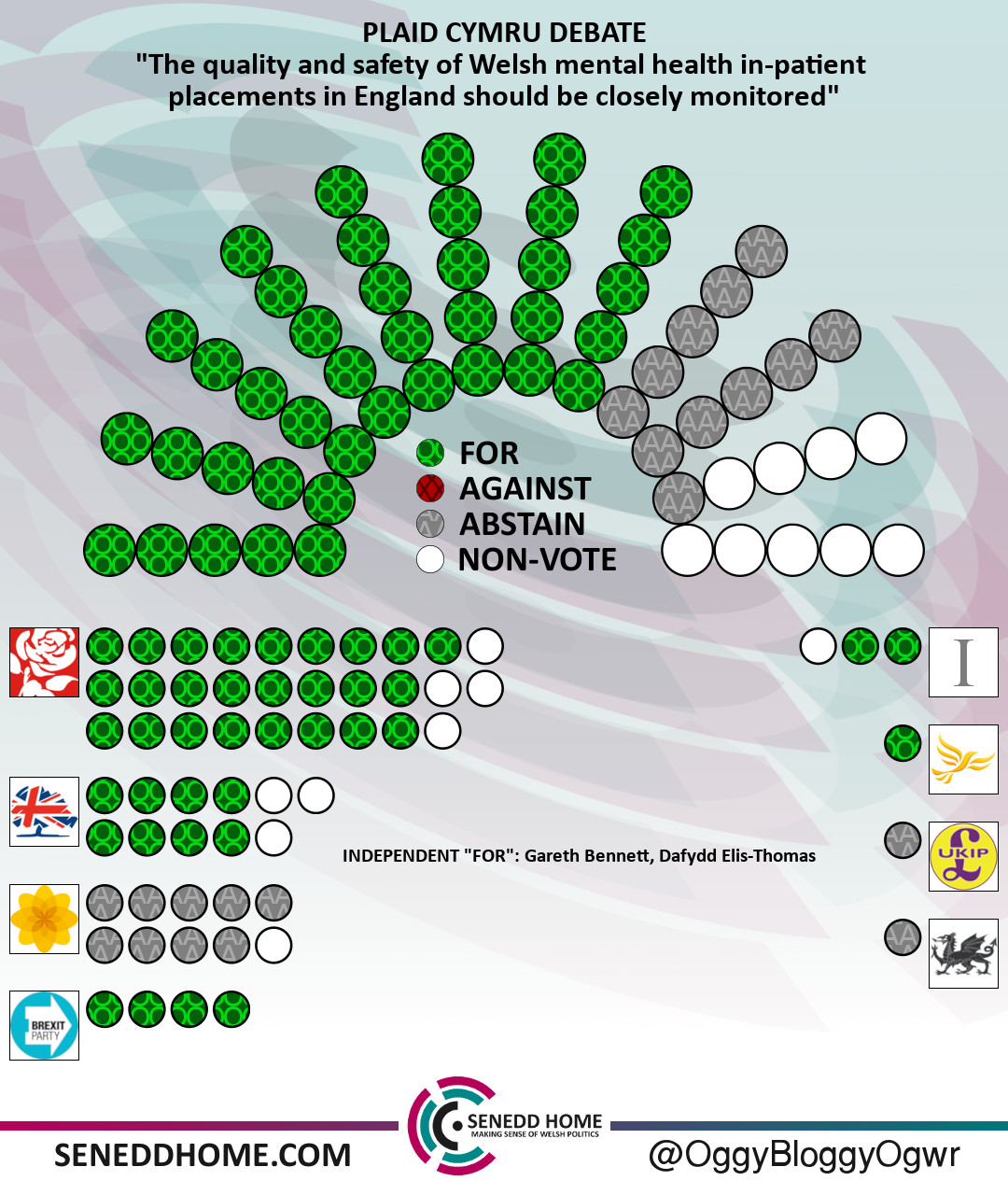