At the Welsh Conservatives’ spring conference in Llangollen, Leader of the Opposition in the Senedd, Paul Davies AM (Con, Preseli Pembs.), pledged to cut the cost of politics by freezing the Senedd Commission’s budget, limiting the number of Welsh Government ministers to seven and opposing any increase in the number of AMs.

Recent polling has suggested a possible three-way fight between Labour, the Conservatives and Plaid Cymru in next year’s Senedd elections.

Paul Davies’ pitch was aimed at those who voted Conservative in 2019’s snap UK General Election – as well as those hostile to devolution – after he made a comparison between “elites” in Cardiff Bay and the EU.

His pledge to “end the gravy train” immediately drew accusations of hypocrisy, with Plaid Cymru saying that under the Conservatives the number of civil servants at UK level has increased.

Also, the Conservatives refused to answer questions from The Western Mail on whether Tory AMs would stop employing family members – which they do to near enough a greater degree than any other party. 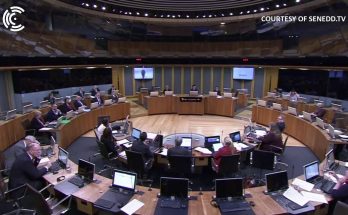