They only held a debate about it a month ago, but the issue of a proposed downgrade of A&E services at Llantrisant’s Royal Glamorgan Hospital was back on the floor of the Senedd yesterday afternoon.

Clear relationship between distance from A&E and survivability

Leanne Wood AM (Plaid, Rhondda) repeated the evidence that there was a clear link between the distance from an accident & emergency department and chances of survival during a medical emergency.

Unlike the broad cross-party consensus in the last debate on this, this motion was about the Welsh Government running away from its responsibilities by their suggestions that they can’t do anything. Leanne Wood said the Welsh Government’s policy of “moving treatment into the community” was a euphemism for closing wards, while the government were losing sight of retaining hospital-based services where they were needed.

“And today, there’s a story in the local papers highlighting that freedom of information requests have identified that there’s been no positive action to attract full-time consultants. There has been action to try and attract locums to fill the gaps. Well, you cannot build a sustainable service, as everyone knows, on locums. And so, everything points to this need to retain the accident and emergency provision at the Royal Glamorgan Hospital – a modern hospital, with a growing population surrounding it and growing demand.”
– Andrew RT Davies AM

Listing statistics showing the 60,000+ patients which use the Royal Glamorgan and Prince Charles Hospital A&E departments, Delyth Jewell AM (Plaid, South Wales East) said it stood to reason that those patients would be redirected and put more pressure on A&E departments which were already struggling to cope – mentioning how her late grandmother had to spend time on a trolly in a corridor at Prince Charles Hospital.

The Welsh Government was playing on people’s confusion over devolution to avoid accountability for health services:

While supporting the retention of A&E services at the Royal Glamorgan, the main complaint from Labour AMs was that they only had 30 minutes to debate it (something that’s becoming a regular feature with Plaid debates – for better and for worse). Mick Antoniw AM (Lab, Pontypridd) said there were no decisions from the Welsh Government to change in the first place, while Vikki Howells AM (Lab, Cynon Valley) said it was a matter of fact that health boards are responsible for the day-to-day running of the NHS – the debate was nothing more than point-scoring.

Any proposals have to be explained to the public

Deputy Minister for Health & Social Services, Julie Morgan (Lab, Cardiff North), repeated what had been said in previous debates – all health boards have a responsibility to deliver safe and sustainable services, while any proposals have to go out for a full public consultation that’s open and transparent.

“The health board will be receiving a further update on the exploratory work being undertaken on the future proposals, including the feedback received during the engagement process, at their next public board meeting at the end of March, where they will decide the next steps. I repeat: no decision has yet been made.”
– Deputy Minister for Health & Social Services, Julie Morgan

Interestingly, the Welsh Government’s amended motion – which essentially said any decision on the A&E will be the responsibility of Cwm Taf Morgannwg Health Board – was also voted down by 18-11 (with 20 abstentions). 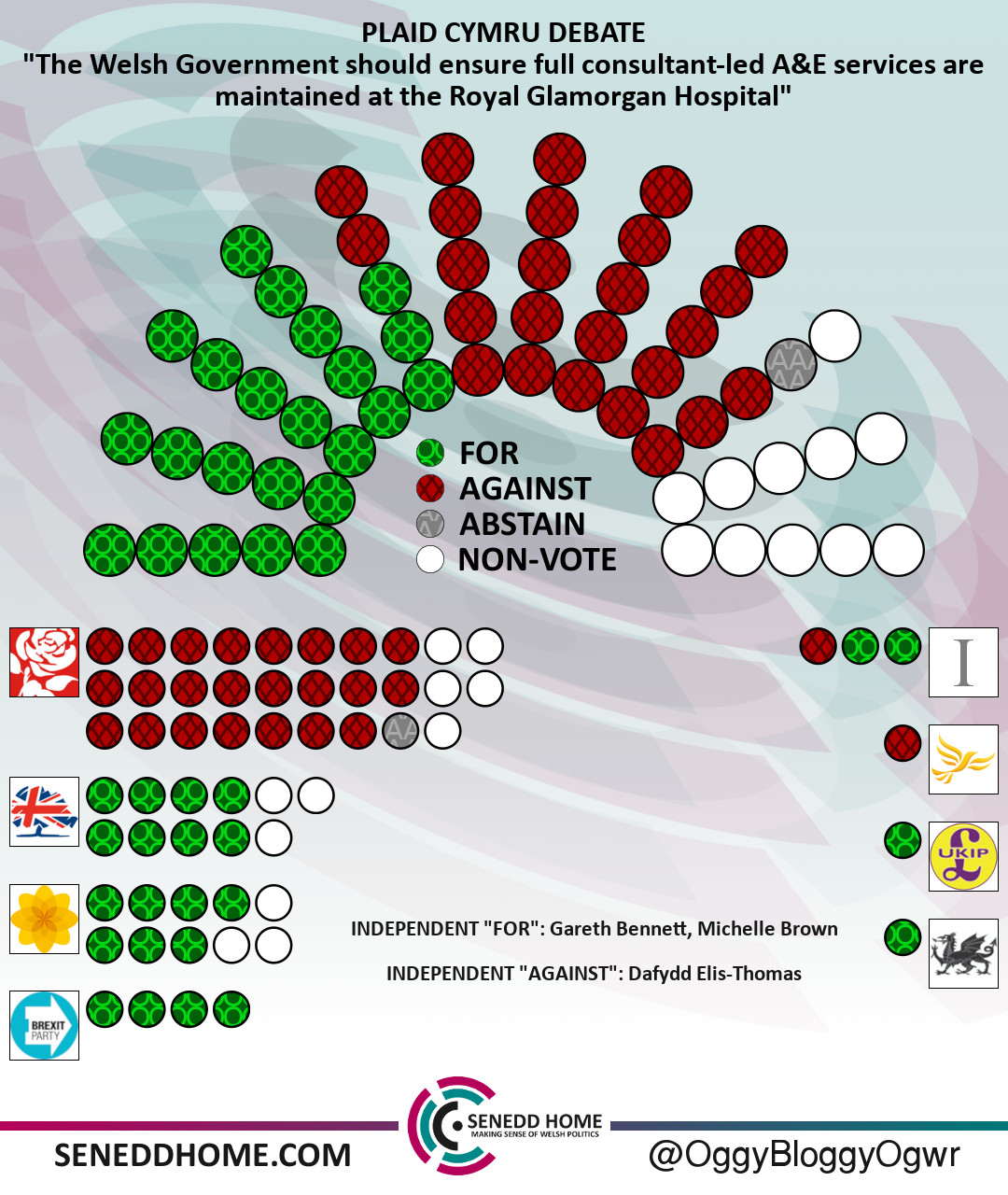