Yesterday, MSs held the first proper debate since March – a sign perhaps that things are starting to get back to the usual routine in “Cardiff Bay/bedroom/office/living room” albeit under social distancing and via Zoom.

I haven’t been posting as regularly on Senedd Home simply because there’s only so many ways you can tell the same story. I’ve also stopped doing video clips unless they’re to make a serious point because the sound and video quality on Zoom is variable.

Following next week’s half-term recess, once MSs start to regularly discuss topics other than the pandemic – and it does look like they’re inching towards that – I can switch Senedd Home back to a more familiar output. Until then, the reduced service remains in place.

The subject of the debate was the Welsh Government’s recently-published lockdown exit plan.

The First Minister praised how the people of Wales responded to life under lockdown conditions, which he described as “outstanding”. The exit plan states what measures will be taken in different areas of public life as the restrictions are eased – though that will only happen if and when the scientific and medical evidence suggests it’s safe to do so.

Talks are taking place between the UK’s governments and the English mayors. While a united four nations approach is preferable, the Welsh Government’s decisions will be based on Welsh interests.

Leader of the Opposition, Paul Davies MS (Con, Preseli Pembs.), said the exit strategy was a missed opportunity to provide some hope – with clear dates and milestones. The machinery of government should now be geared towards lifting restrictions, particularly for businesses.

Adam Price MS (Plaid, Carms. E. & Dinefwr) said the language in the exit strategy was ambiguous as it wasn’t clear whether the Welsh Government were going to try and eliminate coronavirus (as in New Zealand) or simply maintain a manageable number of cases over a longer period (“flatten the curve”). He also believed the track and trace system had to be working properly before restrictions can be lifted.

A question of finance

Several MSs made contributions based around finances. While a supplementary budget is due soon, both Lynne Neagle MS (Lab, Torfaen) and Shadow Finance Minister, Nick Ramsay MS (Con, Monmouth), stressed the need to support the hardest-hit areas. There was also support for a universal basic income.

“I turn to an area where I hope that we can agree, and that is the idea of moving in the post-Covid era to a universal basic income. Now, this is an idea that I’ve been advocating for a very long time, and it has seen sometimes as a romantic idea…. but we’ve seen the Spanish Government introduce this. In response to the crisis, we must commend the efforts of the Welsh Government and UK Government in terms of supporting people’s livelihoods, but….that’s left us with a very complex picture.”
– Helen Mary Jones MS (Plaid, Mid & West Wales)

Darren Millar MS (Con, Clwyd West) warned that different measures taken by the different governments – despite being based on the same scientific advice – was confusing people.

However, Sian Gwenllian MS (Plaid, Arfon) pointed to the phased and careful reopening of schools in Wales – when it’s safe to do so – as an example of Wales making better decisions given the mess in England on school re-opening.

The votes were cast using the bloc voting system introduced for virtual meetings. There were 30 votes cast on behalf of Labour (29) and the other members of the Welsh Government (1) – the last vote I assigned to Kirsty Williams because she’s the senior cabinet member of the two non-Labour ministers. 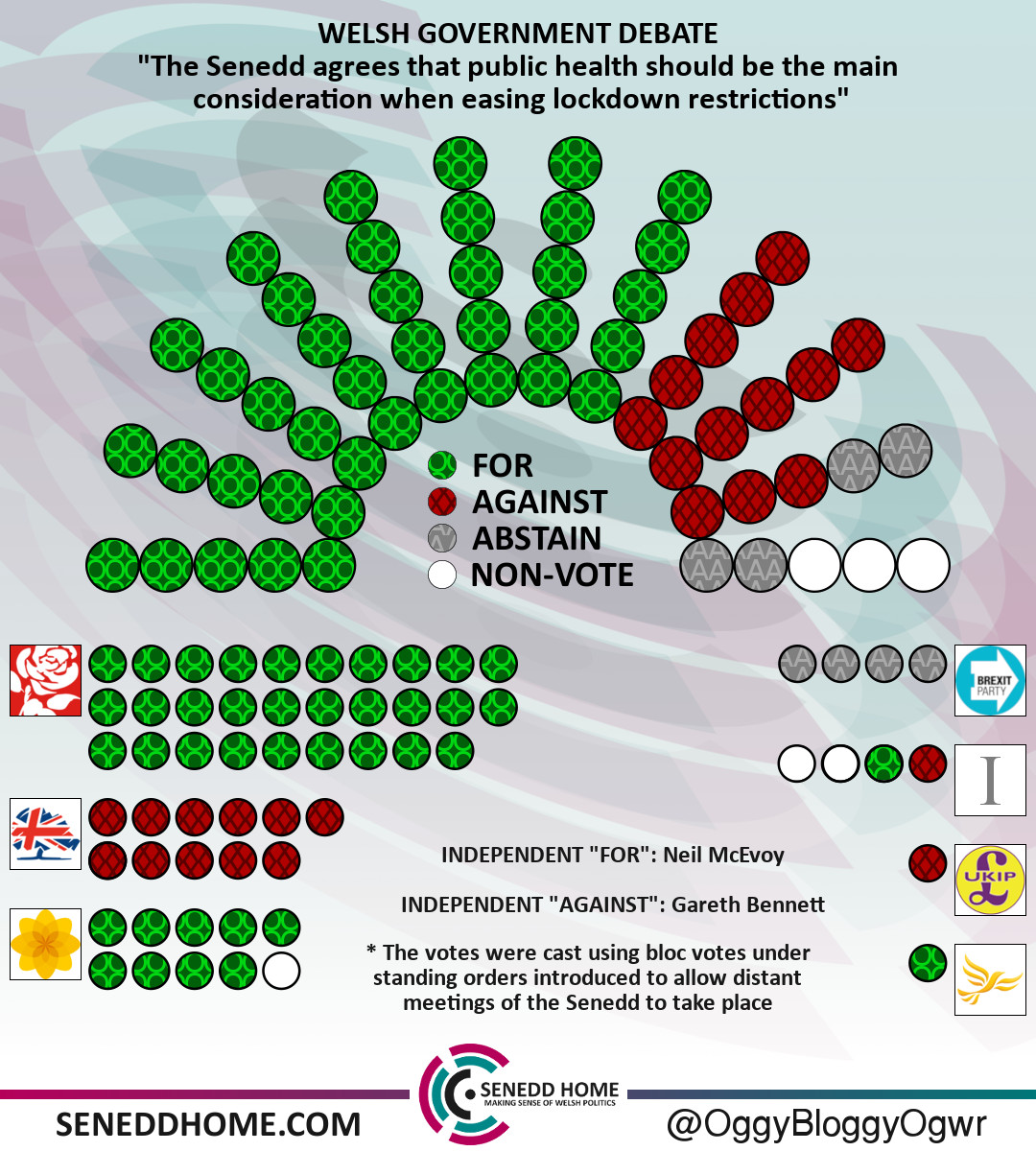