With political focus beginning to shift from the management of the coronavirus to avoiding a second wave and the recovery, yesterday Plaid Cymru put forward their ideas for how to support the economic recovery for debate.

The Senedd calls on the Welsh Government to:

Coronavirus a risk to lives and livelihoods

Helen Mary Jones MS (Plaid, Mid & West Wales) said we can’t go back to the normal way of doing things. Many of the people let down hardest by the economy pre-pandemic are likely to have suffered the most during the pandemic.

The recovery presents an opportunity to reset the economy and that includes many of the measures put forward by Plaid Cymru (outlined above) and there are Welsh Government programmes that can be built upon to deliver it – though there’s a need to be even more radical, suggesting a £5,000 lump sum to unemployed citizens to retrain.

Mohammad Asghar MS (Con, South Wales East) said the recently-published supplementary budget was too focused on the short-term impact of the pandemic rather than long-term economic recovery. He stressed the need for skills retention and apprenticeships to enable a quicker recovery and prevent people from getting stuck in low-skilled jobs.

Neil McEvoy MS (Ind, South Wales Central) saw an opportunity to build the Welsh whisky industry as part of a wider food and drink offer, which if grown to 20 distilleries could generate a £100million export market within 20 years. He supported more home-focused public procurement too and with the potential of EU rules no longer applying soon, it presents an opportunity.

Echoing that, Llyr Gruffydd MS (Plaid, North Wales) spoke in support of building up local food processing facilities and shortening supply chains – which would not only support local jobs but help the environment too.

Mike Hedges MS (Lab, Swansea East) said the focus of support should be on those sectors (including universities, manufacturing and performing arts venues) which are unlikely to bounce back as quickly as essential industries and those industries people will have been waiting months to re-use (i.e. hairdressers, food services). Rebuilding consumer confidence in financial and health terms will be vital.

“We can borrow at very low rates, we could look at alternative ways of funding projects—bonds and so on. But we would need new fiscal powers and new flexibilities to allow this to happen: to raise the current borrowing cap, for example, from the current £1 billion to, I would say, around £5 billion, allowing the front-loading of that so that we can commence the work in earnest.”
– Rhun ap Iorwerth MS (Plaid, Ynys Môn)

Delyth Jewell MS (Plaid, South Wales East) spoke in support of setting up a citizens’ assembly and was disappointed the Welsh Government’s amendments deleted all reference to it. The Welsh Government needed to start listening to people whose voices were often neglected by the political system.

Wales in a good position to support recovery

While not underestimating the potential task facing us in recovering economically from the pandemic, Economy & Transport Minister, Ken Skates (Lab, Clwyd South), though the building blocks were already there in existing Welsh Government programmes like Working Wales and ReAct.

The Welsh Government, nonetheless, decided to table “delete all” amendments to the Plaid Cymru motion and the Minister, while not ruling anything out, was somewhat sceptical about a citizens’ assembly (as were a few other MSs).

“….in Wales we have very unique models of social partnership and we must protect the contribution that our social partners make in helping to inform and shape policy. We should not inadvertently undermine our social partnership model. We also have commissioners. And through the work that Jeremy Miles is leading on, we are calling for ideas, innovation and creativity from all of our citizens and organisations. And, therefore, whilst we are not ruling out the potential role for a citizens assembly, it shouldn’t undermine or duplicate the social model of partnership that we have been able to develop here in Wales.”
– Economy & Transport Minister, Ken Skates

Despite all this, the Minister frankly stated that public policy decisions before the pandemic – such as austerity and privatisation – have left Wales vulnerable to economic shocks. There was a commitment to building a fairer, greener economy and there “was no going back” to the old ways of doing things. 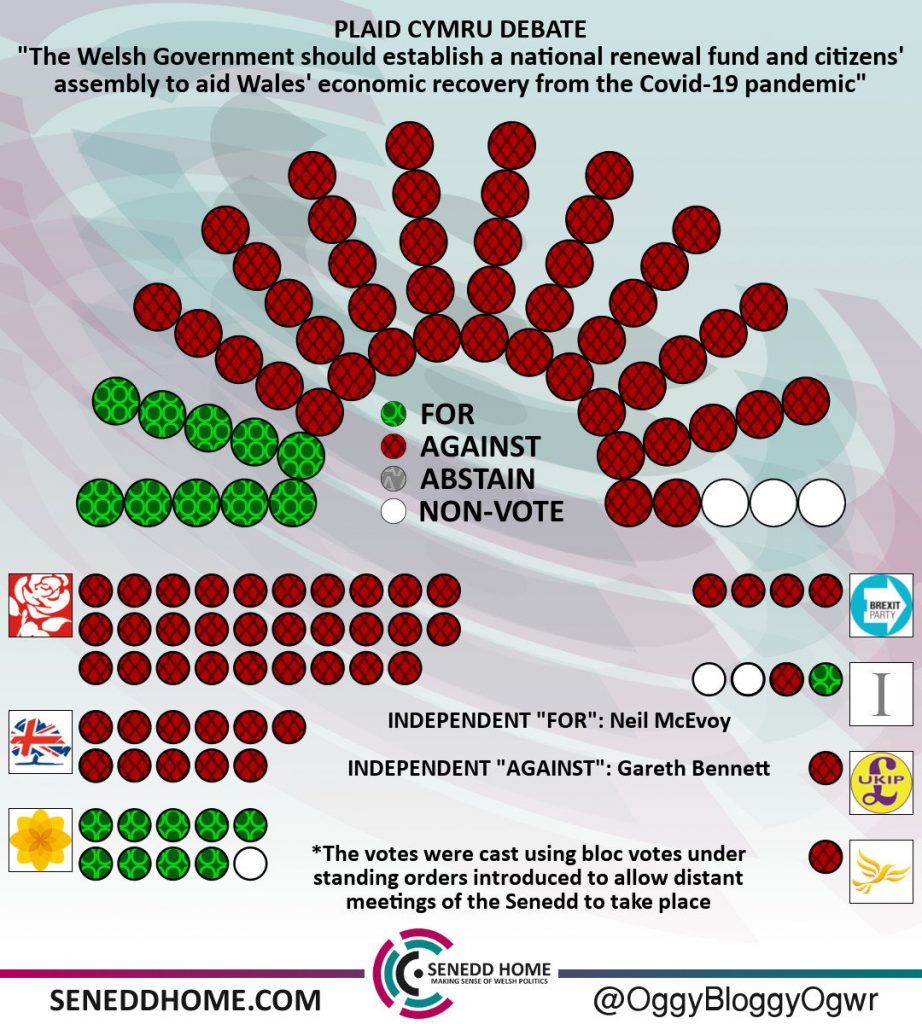