The one you’ve probably been waiting for – and a hell of a way to mark Senedd Home’s 100th weekly update: the first formal debate on Welsh independence.

As the title suggests, the debate was OK but nothing ground-breaking, historic or anything we haven’t heard before.

Plaid got over-excited and tried to paint an independent Wales as an impressionist landscape – very colourful, but style over substance. Those opposed to independence were reduced to well-trodden fire and brimstone portents of eternal doom and denial. Labour tried to stay above it all by proposing vague reforms that, under the existing UK Constitution, will never happen.

You can probably skip to the vote, but….

Independence is a means to an end

Rhun ap Iorwerth MS (Plaid, Ynys Môn) said independence was a means to provide a better future. Yes, it’s challenging – but the alternative is more of the same: stagnation, dependence, poverty, lack of investment and lack of opportunities. The pandemic has proven that Wales needs the kind of flexibility only available to independent countries and many smaller independent nations had Covid-19 death rates far lower than Wales.

Neil McEvoy MS (Ind, South Wales Central) argued for a written constitution and the means by which the public can request a referendum through petitions. He suggested it be drafted by a citizens’ assembly and put to a referendum itself.

“With Scotland gone, Northern Ireland too, there will be no UK. People in Wales will face a binary choice: Wales or England. Are we happy to become a county of England, as UKIP, the Brexit Party and other English nationalists want us? Or are we going to grow a backbone, and decide that we are finally going to stand up for ourselves and take our place among the free nations of the world?”
– Dr Dai Lloyd MS (Plaid, South Wales West)

Delyth Jewell MS (Plaid, South Wales East) thought the pandemic and the response to it presented several possible visions of the future – one is where the UK is held together by force through the UK Government’s imposition of policy on Wales, the other is a vision of hope where Wales can reflect our own values and build something better with all tools at our disposal.

“The Welsh Government’s position is the constitutional equivalent of St Augustine’s plea, ‘Make us sovereign Lord, just not yet’. No, let’s give the idea of a reformed UK, which would allow for coordinated governmental action to be pursued, one last heave, even though we’ve seen, over the last few months the catastrophic mistakes of a dysfunctional, incompetent, shambolic….Westminster Government that has treated the Welsh Government and the Welsh nation in a manner that has oscillated between benign neglect and outright contempt….”
– Adam Price MS (Plaid, Carms. E & Dinefwr)

Independence “insurgency” is a dead-end; alternatives are there

Darren Millar MS (Con, Clwyd West) thought the debate was a waste of time given the other things we have to worry about. The Senedd has already spent far too long debating the constitution and support for independence was stagnant.

It was becoming a problem for Labour too, with Darren Millar calling for independence-supporting Labour party “insurgents” to be expelled to prove Labour’s loyalty to the Union.

While Darren Millar remained committed to devolution, it’s worth noting the amendments tabled by others calling for the exact opposite of independence – direct-rule from London; the argument going that Wales should have a right to change its mind about devolution as much as the Union.

Carwyn Jones MS (Lab, Bridgend) thought calls for abolition of devolution would drive more people towards independence (in Scotland at least), while independence wasn’t necessarily always a peaceful event. He supported some form of confederal UK:

“I believe in a sovereign Wales, but I believe that we can share that sovereignty with the other three entities within the UK. It’s a kind of confederation. Now, I grant you that shared sovereignty doesn’t have the same resonance electorally as ‘Free Wales’ or ‘Rule Britannia’, and it’s a difficult concept to explain, but I say this to Darren Millar in the spirit of debate: I think we’ve moved well beyond constitutional tinkering; this is fundamental to the future of the UK.”
– Carwyn Jones MS

Mick Antoniw MS (Lab, Pontypridd) thought the matter of self-determination lies with the Welsh people although he favoured a reformed, decentralised UK. He supports a UK Constitutional Convention to be set up to consider a new constitutional framework which would be put to a referendum.

A referendum would need a government mandate

On behalf of the Welsh Government, Chief Whip & Deputy Minister, Jane Hutt (Lab, Vale of Glamorgan), accepted that the pandemic has put the UK’s constitution under increased tension.

The Welsh Government’s position was made clear in Reforming Our Union. That said, for a referendum to be held – on independence or direct-rule – there needs to be a mandate from the electorate in next May’s election (see also: State of Wales – Five Steps to Independence):

“….if a Welsh Government has secured an electoral mandate to hold a referendum on a fundamental constitutional question, it is entitled to expect the UK Parliament to make the necessary arrangements. Provision for a legally binding referendum on Scottish independence in 2014 was made by the UK Parliament, following a clear majority won by the SNP in 2011. But that precondition is essential for Westminster to be asked to make the arrangements for a referendum on the constitutional status of Wales. That request must come from a Welsh Government with a mandate to do so, and no such mandate presently exists.”
– Chief Whip & Deputy Minister, Jane Hutt

A version of the motion amended by the Welsh Government – supporting a reformed UK and the benefits of pan-UK decision-making – was approved by 29 votes to 24. Additionally, all amendments calling for a direct-rule referendum were comprehensively rejected.

A reminder that the vote graphic is based on the original Plaid Cymru motion (because it was a Plaid-led debate) and also if you’re going to share the graphic, share the article alongside it. 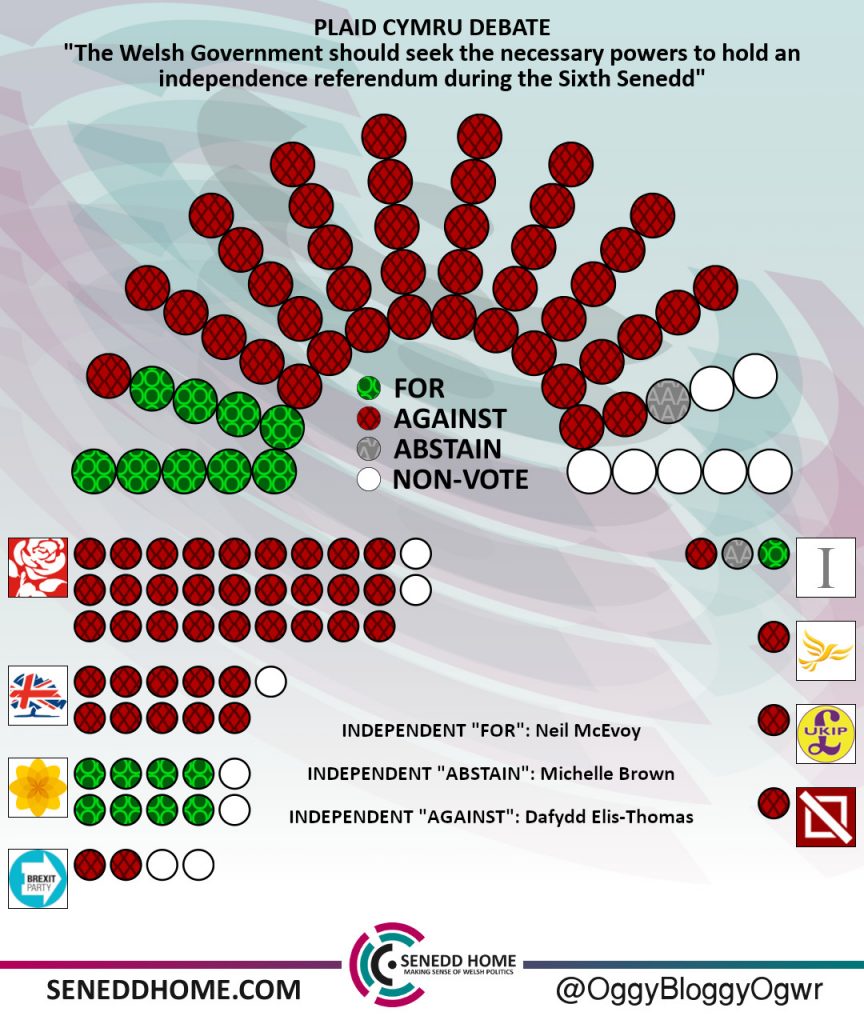