“Though we concluded our evidence gathering for this inquiry before the true extent of the Covid-19 pandemic was realised, it is clear that difficult decisions on taxation will need to be made in order to aid economic recovery. We urge the Welsh Government to start considering tax policies and looking at contingencies to ensure that all the fiscal levers are available to aid Wales’ recovery from the global pandemic.”
– Committee Chair, Llyr Gruffydd MS (Plaid, North Wales)

Since April 2019, Wales has been able to vary income tax up or down by up to 10% (“Welsh Rate of Income Tax/WRIT”). The Welsh Government has committed to keeping WRIT unchanged for the remainder of the term.

A combined 141,200 people are estimated to cross the Wales-England border in both directions for work daily, but the income tax they pay will be based on where they live. The Committee was focused on the cross-border impact of different rates of income tax.

Research by Cardiff Business School found that a 5% cut in income tax in Wales would reduce Welsh Government revenues by up to 3.9%. While it would eventually result in a 0.13% increase to GVA and a 0.35% increase in employment, this will only happen over a longer period.

2. Cross-border “tax migration” will be more common amongst top earners and there are fewer of them in Wales 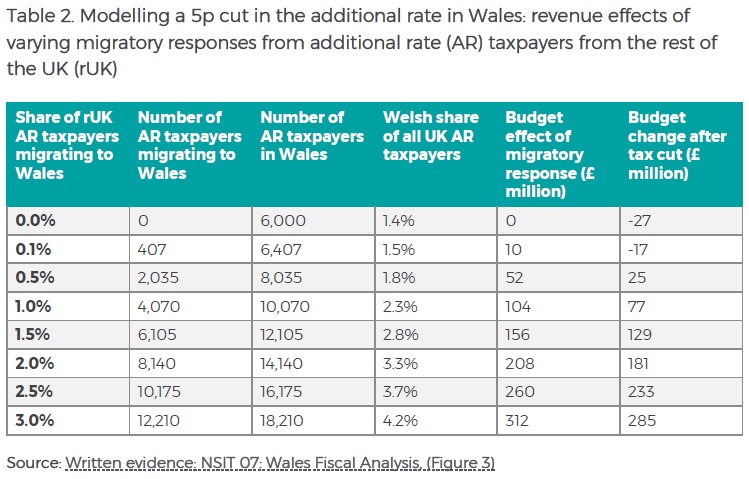 To be in the top 1% of earners in Wales you need to earn a minimum of £94,600, while the UK figure was £153,400, meaning differences in earnings between Wales and England were also bigger at the top end than at the lower end.

The Institute for Fiscal Studies’ David Phillips told the Committee that international evidence points to higher earners making the most of different tax regimes than average earners. That said, moving to take advantage of different tax rates is in itself expensive (cost of moving properties, tax planning, social impact). He concluded that it may only be worth the effort if there’s a big difference in tax rates.

If Wales abolished the additional/top rate of income tax (45%), then at least 1,100 top earners would need to move to Wales for the tax cut to lead to an increase in Welsh Government revenues. If 6,000 top earners moved to Wales, tax revenues would increase by up to £129million a year – effectively doubling the number of top-rate taxpayers in the country.

The Committee recommended the Welsh Government considers tax policy options to broaden the tax base – including attracting young graduates and high-earners – but only after taking into account non-tax factors which may affect migratory behaviour (employment, cost of living, education).

3. The Welsh Government need to be wary of people using tax loopholes

One of the biggest tax loopholes to minimise an income tax bill is for someone to incorporate their income by, for example, registering as self-employed or as a company.

The difference in tax bills between an employee earning £40,000 a year (income tax) and a company/self-employed person (dividends, corporation tax, capital gains etc.) earning the same amount can be up to £4,500 – and it’s completely legal.

There was also a warning on so-called spill-over effects. In Scotland, when the basic rate of income tax was cut to 19%, those who claimed means-tested benefits run centrally by the UK – such as universal credit – saw their benefits reduced, which effectively cancelled out the tax reduction.