Deputy Economy & Transport Minister, Lee Waters (Lab, Llanelli), started with the grim statistics that 80 children were killed or seriously injured on Welsh roads last year and there are 4,000 road accidents which result in injuries annually.

The evidence is clear that reducing speeds reduces accidents and speeding ranked highly as the most common form of anti-social behaviour in all communities. In terms of how it would work:

Transport for Wales has already developed a mapping tool to work out which roads should change and “encouraging discussions” have taken place with Police & Crime Commissioners around enforcement.

The reforms will take a while though, with any change – which will require Senedd approval – not expecting to be in place until 2023, so after the next election.

Sian Gwenllian MS (Plaid, Arfon) tabled an amendment calling for proper consultation with enforcement agencies – which was accepted. The enforcement regime had to change to ensure any speed limit change had real impact and value and full costings had to be laid out. Mick Antoniw MS (Lab, Pontypridd) agreed and thought the proposals would be welcomed in his constituency where there are lots of narrow streets.

“I remember people shouting and screaming at the idea that we should all be wearing seatbelts, and other people saying that it was an affront to people’s liberties not to be able to smoke in children’s faces. Nobody would argue those cases now, and nor should we be imposing on children the inability to play outside and to get to school safely….because it is the fear of parents that prevents them doing that. It is not the children who are resistant to that.”
– Jenny Rathbone MS (Lab, Cardiff Central)

There was support on the Conservative benches too. As the regulatory change could effectively happen overnight, Shadow Economy Minister, Russell George MS (Con, Montgomery) called for an extensive public information campaign and warned that like the use of seat belts, default lower speed limits may end up being a generational change rather than an instant one.

“It’s common sense and it’s a safe move. A person is seven times less likely to die if hit at 20mph than 30mph, or 10 times if they’re over the age of 60. A study aimed to evaluate the impact of the roll-out of 20 mph speed limits across the city of Bristol found that there had been a reduction in the number of fatal, serious and slight injuries from road traffic collisions equating to estimated cost savings of over £15 million per year and that walking and cycling across the city had increased.”
– Janet Finch-Saunders MS (Con, Aberconwy)

Although the vote was binding, it doesn’t mean the policy has been introduced; it means the Senedd has given the Welsh Government the green light to work on it. As mentioned, it’s not likely to be formally introduced for a while.

The Tories presumably had a free vote on this. 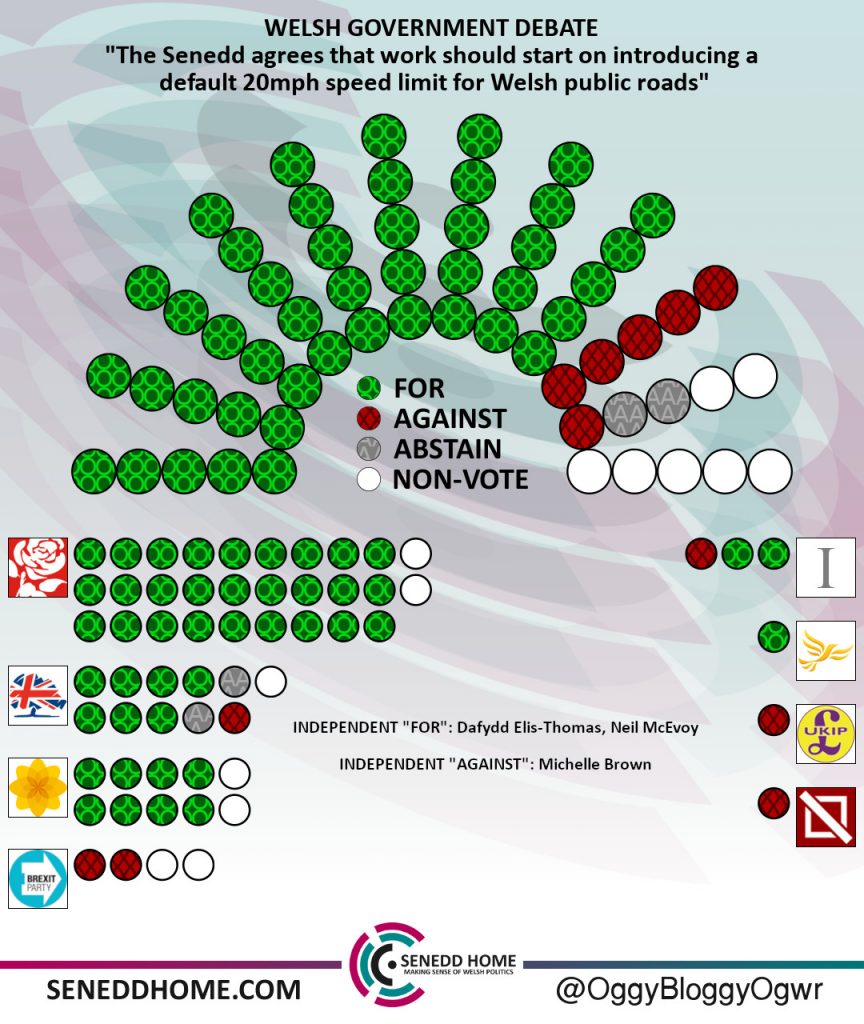