Decade of cuts have left bus services in peril

Slamming the Welsh Government’s pandemic movement restrictions as “more draconian and longer-lasting” than any other part of the UK, Darren Millar MS (Con, Clwyd West) said it was important government rules are fair and proportionate.

With lockdown easing, many people will opt to travel by bus, but a decade of cuts and the implementation of social distancing restrictions (i.e. limiting the number of seats in use) should prompt more support for the sector. The Confederation of Passenger Transport said an additional £5.7million a month would restore bus services to pre-pandemic capacity.

While finding a lot to agree with in the Tory motion, Helen Mary Jones MS (Plaid, Mid & West Wales) presented a scenario whereby there was an outbreak in Paris. In those circumstances, wouldn’t it be right for the Welsh Government to be able to require quarantine for someone from the rest of the UK visiting Wales?

“….the (bus) industry welcomes the £29 million that the Government announced on 31 March, but let’s be clear, that was not new money. Also, that money only lasted three months, and those three months have now passed. So, Wales is the only UK nation that has not provided additional funding for support for the industry.”
– Shadow Economy Minister, Russell George MS (Con, Montgomery)

People face a choice between public transport or nothing

Lynne Neagle MS (Lab, Torfaen) said that for many of her constituents, it’s a choice between travelling by public transport or nothing. She supported calls for mandatory face coverings to be used on public transport, both for general public health reasons but also to protect bus drivers – who’ve been disproportionately affected by Covid-19.

“Not a serious response to serious times”

He rejected pretty much every claim made by the Conservatives during the debate and accused them of trying to make public health policy by press conference.

“Our emergency funding will continue to guarantee backing for the (bus) industry. Our support now stands at over £45 million for the first six months of this financial year, and yet today’s motion regrets our failure to provide adequate support. These are serious times – this is not a serious response.”
– Deputy Minister for Economy & Transport, Lee Waters

Guidance on the use of face coverings on public transport in order to allow more people to travel is being considered, but he warned the Senedd that there are trade-offs – such as the impact on the disabled (who might not be able to wear face coverings). He also rejected Conservative criticisms of a lack of support for Cardiff Airport, saying the Tories should put more effort into arguing for a UK Government-led regional airport strategy.

To hopefully prevent a repeat of last week’s fun and games, here’s a reminder that this was a Conservative-led debate so the graphic is the vote on whatever’s listed in the box at the top of the page.

The government-backed amended version – which replaced the original motion and noted support given during the pandemic and working with other UK nations on lifting travel restrictions – was passed by 29 votes to 22 with 4 abstentions. 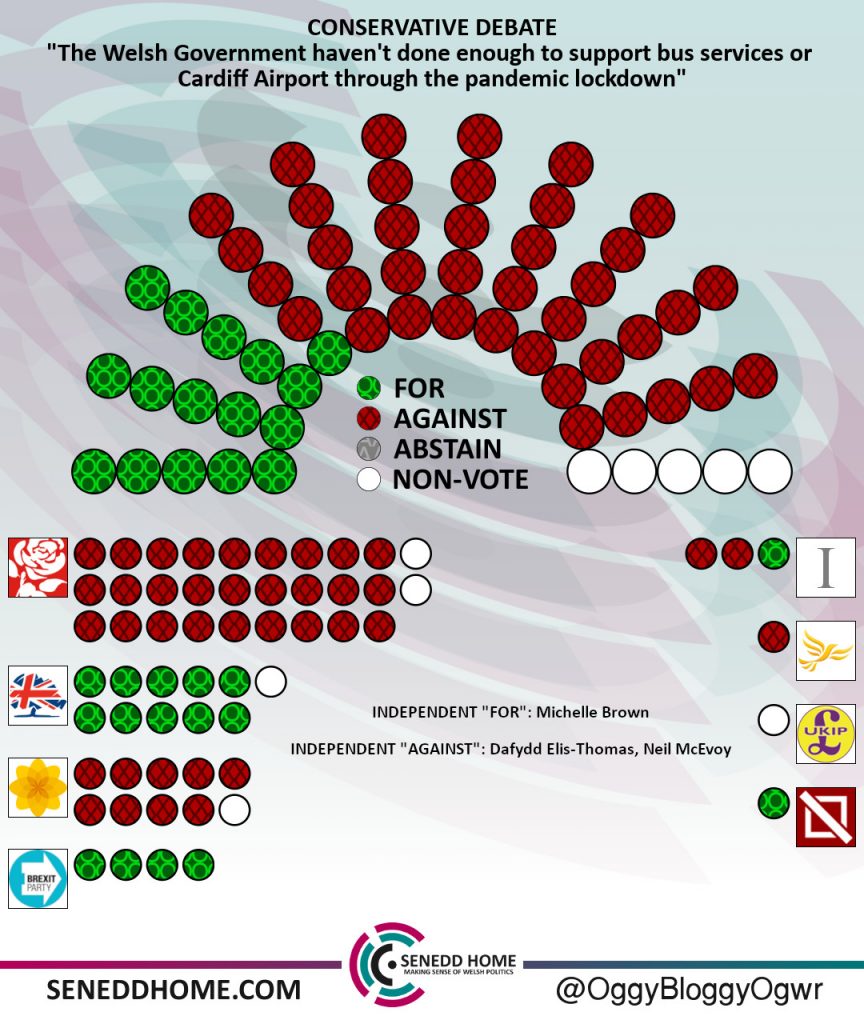