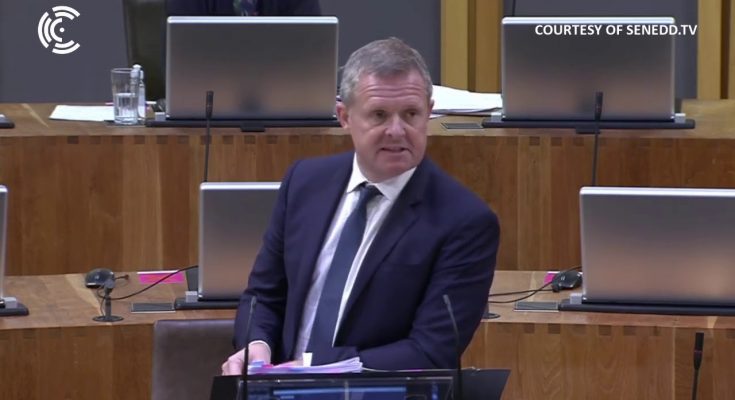 Setting out what he describes as the factual arguments against the Bill, Counsel General & Brexit Minister, Jeremy Miles (Lab, Neath), went through each part one by one stating how it would affect devolution.

This ranged from mutual recognition and non-discrimination clauses which could potentially block the Senedd introducing a ban on single-use plastics, clauses which could allow professionals with non-recognised qualifications to work in Wales, centralisation of oversight in a UK Government department and also breaches international law concerning Northern Ireland.

As things stand, the Counsel General committed himself to doing whatever’s necessary to prevent the “badly thought through and highly damaging” Bill becoming law.

Shadow Brexit Minister, Darren Millar MS (Con, Clwyd West), enthusiastically backed the Bill. The people of Wales consented to EU powers being transferred to the UK Government and, where appropriate, to the Senedd. He suggested hypocrisy in being uptight about the UK Government setting state aid rules, for example, when the Welsh Government and Remain campaign having no problem with the EU doing so.

In response, the Counsel General said Darren Millar’s speech was “a work of fiction” and asked for him to point to where in the Bill it transfers any additional powers to Wales? The Conservatives simply don’t like how things are done here and Alun Cairns’ speech in the House of Commons demonstrates the thought process behind this.

Dr Dai Lloyd MS (Plaid, South Wales West) listed several examples where powers could have been restricted under the Bill including smoking bans, organ donation and possibly free prescriptions. He suggested the Bill could lead to “a second Tryweryn”.

“I found a European state that had been a pinnacle of the rule of law, a mother of parliaments, with a constitution that was respected throughout the world, where legislation was introduced to remove the autonomy from devolved states, to empower the Government to enact laws to violate the constitution and to disempower the judiciary. That was the 1933 Enabling Act of the Weimar Republic that brought Hitler to power.”
– Mick Antoniw MS

Following a question from Delyth Jewell MS (Plaid, South Wales East) on the practical or legal steps that could be taken to protect devolution, the Counsel General said legal options were being considered. However, the intergovernmental agreement reached as part of the withdrawal of the Continuity Act provides a constructive way forward if the UK Government are willing to engage.